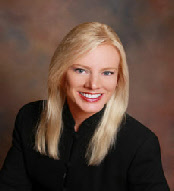 Attorney Laura J. McKinnon has dedicated her life to fighting for the disabled and injured .

Attorney Laura J. McKinnon is the Senior Partner of McKinnon Law Firm.  With office locations in Fayetteville, Russellville and Ft. Smith, Arkansas. As a personal injury lawyer, she has represented thousands of  victims throughout the state of Arkansas.  Because Laura holds the belief legal representation is for everyone, she has helped client’s levels the playing field against the big insurance companies and the government. Having devoted her entire professional life with this belief, many client’s have received the compensation they deserve.  After all in 1984 she began her legal career handling Asbestos claims against corporate giants.

Laura founded the current firm in November 1988.  Her goal is to fight for the rights of the disabled and injured by others negligence.  Today her litigation practice focuses on Social Security Disability, Auto Accidents, Workers’ Compensation, Personal Injury and Veteran’s Disability Law.

Since 1984, she continues to build strong positive reputations with her clients and entire legal community.  Born and raised in Wing, Arkansas, Laura is firmly rooted in Arkansas.   Later receiving her B.A. and J.D. from University of Arkansas – “Go Hogs!”